Disclaimer: Sociological commentary, not for the extremely emotional: Also, this is merely an opinion, within the (mainly) North-Indian socio-cultural context. others I am sure will have different opinions. Idea is not to win a discussion, idea is to raise questions and initiate discussion.Thank you. ..............And then there are the women who are forced to pray for their husband's long life even though the husband beat them every day after his pegs and hurls abuses at her.Wonder what the woman whose yelps I hear near our badminton court late in the night, begging her husband to spare her the slaps, prays for on Karva-chauth? What would I pray for?

Or is it that the socialization process tells the women to accept the husbands/sons no matter what they do and who they are as HUMANS? Bet the alcoholic, beating husband doesn't care a hoot, but the mother or mother-in-law would force the woman to do the fasting and poojoing the guy. And she would do it for fear of "society" and to save herself and her family (read husband) the ridicule from the "other" women around her. Is it about the men really, that our society needs to change? Do we everyday women need SERIOUSLY to rethink our everyday positions and unquestioningly accepted roles and behaviour patterns in marital and natal families, friend circles, society at large.DO WE NEED TO SPEAK UP AND not unwittingly accept and partake silly traditions? For fun or for anything for that matter!!

I want my daughters and all their friends, girls and boys, to ASK themselves these questions. I want them to make sure they ask their boyfriends and girlfriends respectively and/or partners to be,questions like: what they think of festivals like 'karva-chauth' in today’s context when India is struggling to bring social justice to it's womenfolk? Can the younger generation on my friends list, opinionated young ladies and gentlemen, who do have an opinion on this particular festival, I know you do, please share it without fear of ridicule on your walls. forums, among yourselves even if it means going against mainstream society and parental values. Because, until you all start thinking and talking and putting your foot down, nothing will change. Because, how can we change mindsets of a society that is not even participating in everyday discussions about everyday societal activities. Are any of you fighting moms for praying for violent husbands? ANYONE? And remember, if you air a view does not always mean you yourself are going through it, it means you are aware that these things happen and you want to change it in your own lives.Cause if we bring the change in our thought process we have helped change one family, ours, family, the basic building block of society.Think, think, ACT.

Comment:  Didi this is something I run into every year coz every one around me fasts. I just simply cannot! I never have and never will. My husband is amazing and loves me to death, but he's not god. Thankfully he agrees so I don't run into a big issue about this. I find it very hard to believe that in the US and in this day and age we are following this blindly and not questioning it at all. And you are right, not evolving as a society.. But then again it's a belief thing and I don't want to offend anyone's.

Response:  I understand your stand totally. Also, the relation between a couple is purely their business. For example, I or you or anyone might hold their partner in high esteem, (I am not questioning that at all) but I think that this festival somehow in some of it's rituals forces women to publicly stamp their marital status as a loving wife who will touch the husband’s feet before food intake irrespective of whether the husband is deserving of such stature or not. And this in a small way I link to the overall manner in which the women look at themselves as subservient to the male. This need not be a conscious looking upon oneself, but surely it has sub-conscious repercussions. 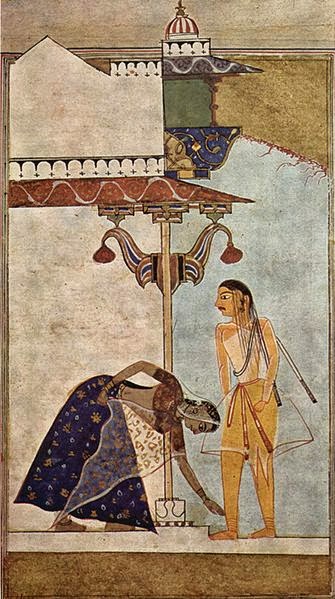 An Indian woman is touching the feet of her husband, a tradition to show respect that is embedded in      culture. As painted by a west-Indian artist, circa 1530. This is the ritual followed during Karva-Chauth too all over North India.


Quote from Wiki: (Food for further thought and discussion) : The festival has been criticized as being inherently sexist because there is no reciprocal fasting by males.[26] There have been calls to modify or eliminate the festival by commentators who hold it to be "anti-women" and to "perpetuate the notion of women's dependence on men."[27]Karwa chauth has been cited as a symbol of cultural repression of women by some Indian feminists, such as Madhu Kishwar who has put it in the same class as "Khomeinivad" (i.e., pushing women into position of subservience to their husbands, similar to the family structure allegedly favored by Ayatollah Khomeini).[28] Some writers have asserted that such "rituals work insidiously" to create a "an instrument of social control" that oppresses women and that the even greater popularity of Karwa Chauth among urban, educated participants raises the question of "which is the greater barrier to women's liberation: religion or the market.”

Comment: Can I add my tuppence?.....I think its regressive and helps to perpetuate the theory of women always being subservient .....myth, religion all mixes up to make the stories of non-adherence being fatal and so the tradition to continue this ritual goes on.....why do men need to outlive women?...and how does what I eat anyway have anything to do with any god?...where does one stop?....oh but then the idea is never to...you see. Your life has to be lived according to 'them'....your will and wishes don't count....you are given a few concessions like buy yourself bangles and bling and stay home and brainwash yourself....sorry if I have hurt anyone...but then its all my tuppence...so there....Blech !

Response:  And am not saying "I" am holier than thou to anyone.But, the next generation is MY kids and they just NEED to stop al this. ALL of them as,save them all from what has been rightly calls regressive and repressive behaviours, and not just mine, as they are the "deviants" like I have been all of my years  hahahahaa!! We have to have them THINKING man!!

Comment:  I totally agree that some rituals were created to create the social control over women, but that doesn't apply to most women today, so why do we continue? I think most women don't want to make a change, it's a fun little ritual for them and some men are also fasting with their wives. But no one wants to question it. That's strange.

Response: And is this not where the "market" comes in ? It is the commercialization of it all that has led to the larger numbers of women ignoring any questions their brains might be wanting to raise.It is fine as long as it stays fun but does it? What I am trying to point to are the deep rooted underlying socio-cultural (male centric) ideologies of these innocuous "little" "fun" festivities that we say are "so" difficult to change when bigger issues like "women abuse in society" occur.


This is just a short discussion that has caused a few thinking young minds to open up. Do we all need some serious self analysis??

Posted by Art and Ginger Chai Conversations at 6:21 AM