Killing Fields, Gendercide....Evan Grae Davis....we can overcome and we shall....deep in my heart I do believe.....

It can not be a colourful font I use today. I usually blog in bright happy colours, I am a happy colourful person.....but today my mood is black and my heart is weeping. I am not here to blog to win prizes!!?! My mind is screaming.

But, yes, I am very glad of the cue that I got from the videos I watched sent to me by Indiblogger. Franklin Templeton Investments partnered the TEDxGateway Mumbai in December 2012, and honestly what a good job done.

Because, I strongly believe that to  be able to change something, we first and foremost need to admit to it. We need to admit to ourselves that we all as a society, as a race, as a whole, are responsible for the evils we create and the killing (physically or by killing her soul by physical abuse and torture) of girl children is the worst evil there is. Whether it is China, India, Cambodia or any other place in the world, this crime is rampant and must stop. By these talks and through blogging much awareness can be built around these issues.

I will use black and green for this post.I equate green to nature and peace.....to an attempt to appeal to the natural tendencies of humans of love and caring, nurturing and protecting one's own fellow humans and protecting those who are vulnerable.I would like to warn you my dear readers and friends that this post is not for the weak hearted. It is a hard hitting, time consuming, pain causing, thought provoking and action demanding post. So, let us say, proceed at your own risk but if you choose not to proceed, do also remember, that the risk you take by choosing to ignore these facts that are about to unfold in front of you, you are risking the future and even the lives of many many many young innocents.

Evan's talk on TedX is simple yet impactful. He talks about the documentaries he has made on genocides and human suffering through which he hopes to bring awareness on these issues. He further describes gendercide which troubles him deeply as it does me.His talk presents clear statements of facts for us to first and foremost acknowledge what we all have allowed happen by simply not screaming out against it at the right time.

Here is a picture of the tree at Killing Fields in Cambodia, Evan Grae Davis talks about in his documentary. Here at the Killing Fields, genocide took on an entirely new meaning....sometimes one wonders at the mean capacity of human thought, and it leads one to question many things including the presence of God.If there is a God then how does he/she allow this? 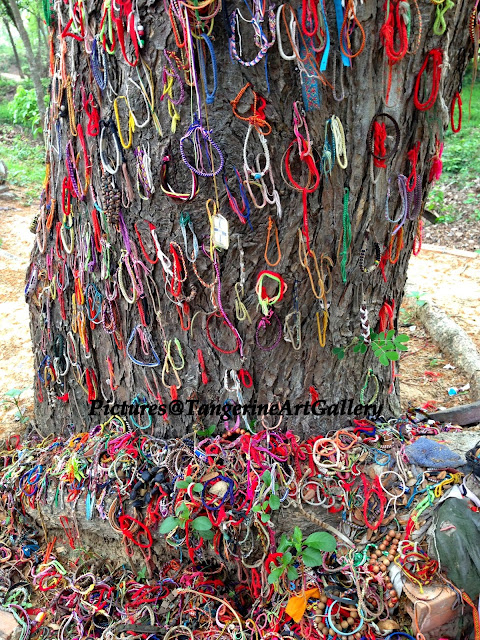 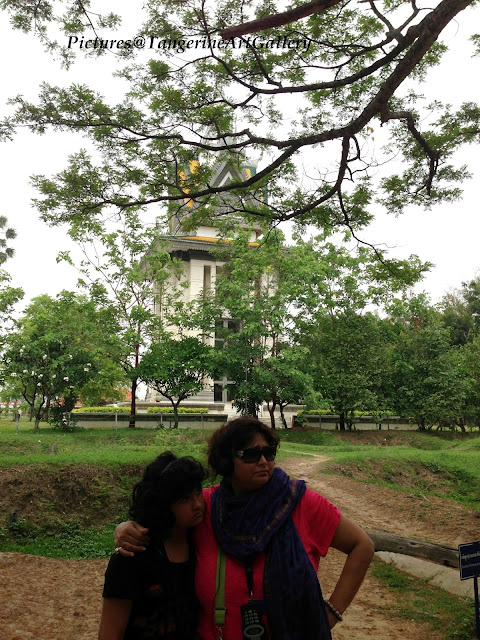 The above picture shows the pain and sorrow at getting to know about the many many young kids who were smashed against this tree by the perpetrators of the Khmer Rouge crimes.This barbarous act was done so that no children and women remained to inflict revenge in later years on the Khmer Rouge.
To read more about the Khmer Rogue read here.
http://en.wikipedia.org/wiki/Khmer_Rouge

Yet, when one is lost for answers, who does one turn to? One has to appeal to a higher presence to help ease the pain, to beg for peace and love for those who have been taken from us so brutally, to beg for forgiveness for the inhuman humanity that lost it's way and became the barbarians they did. Frantically searching below, for a paper and pen to write a prayer for those thrown uncaringly
into these mass graves. 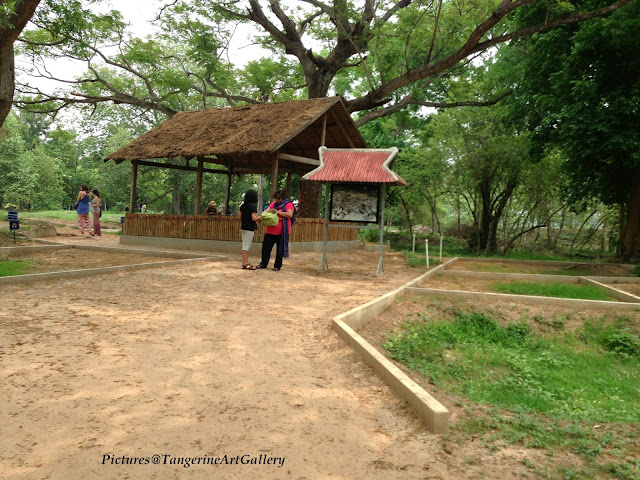 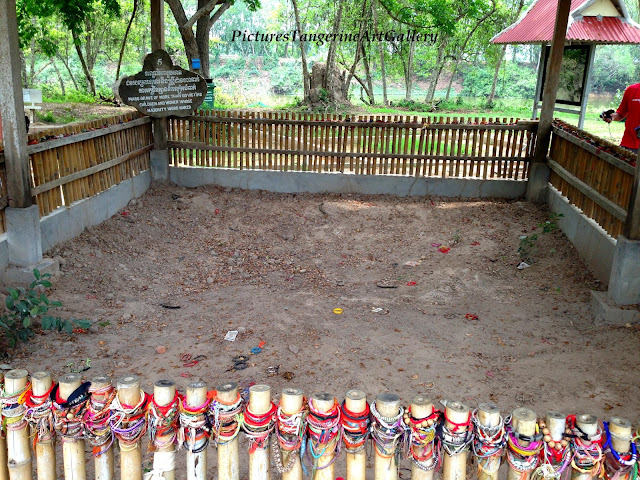 With a fervent hope that the love and prayers reach the other world. 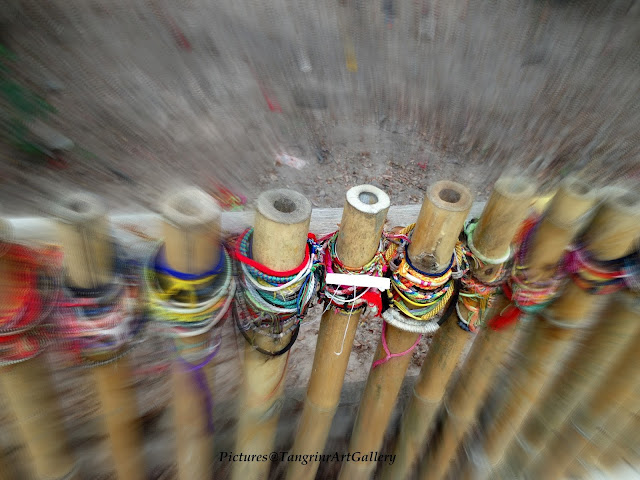 After a troubled tour of the entire Killing Fields seeing human teeth and nail remnants in trails, patches on the field and praying the many skulls of those gone by through the genocide here....... 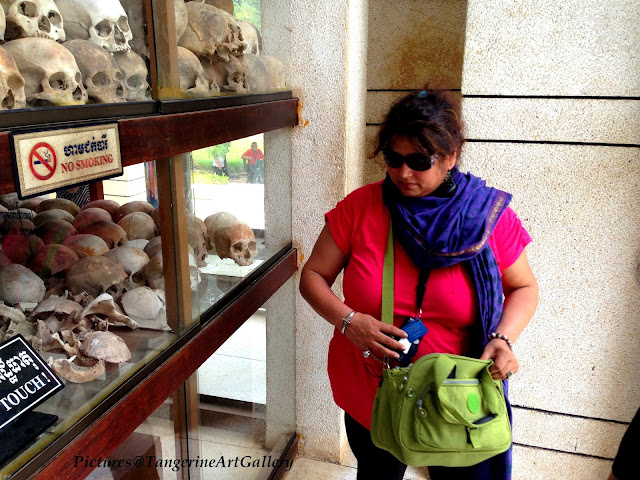 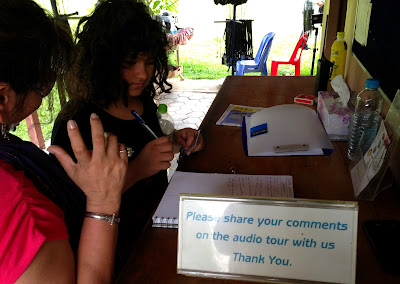 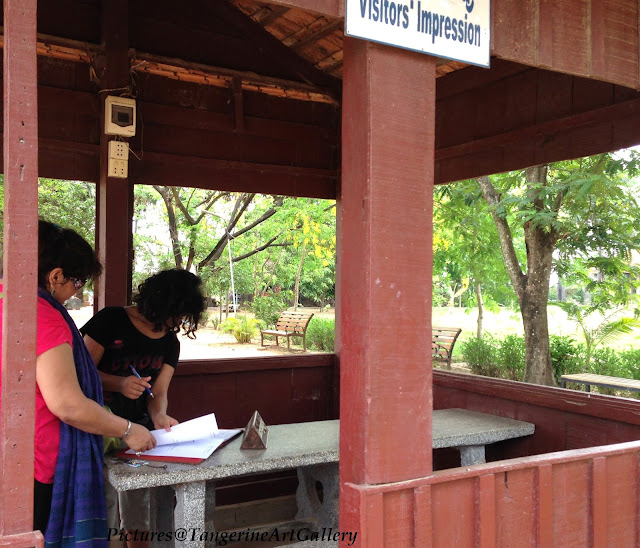 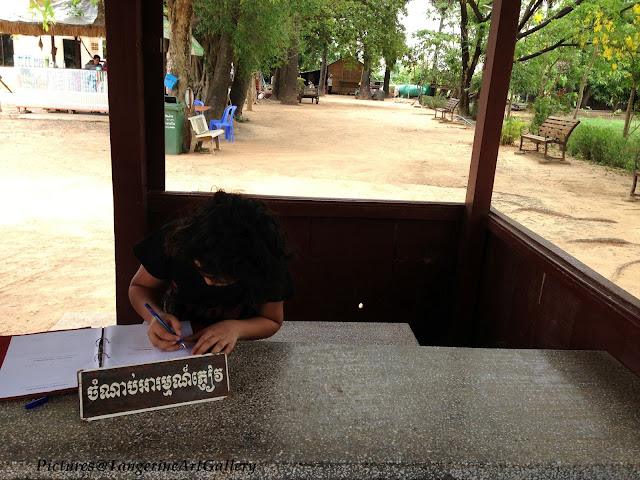 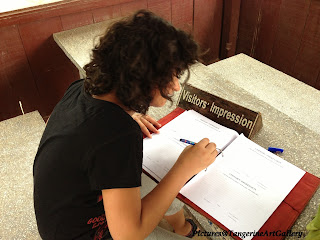 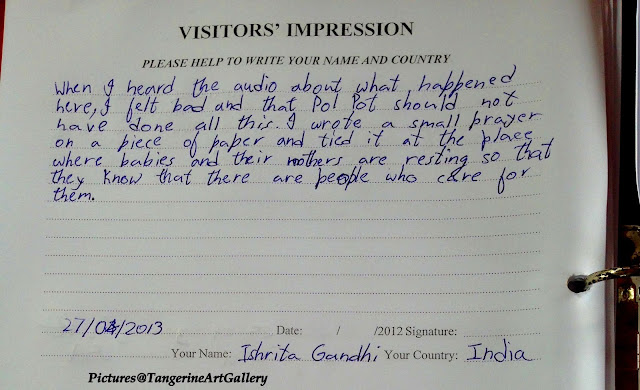 How sensitive a young child's note towards the people who were so brutally killed ,of whom most were women and young girls. To understand that it is important for them, even in death, to know that people care for them...it brought tears to my eyes.....but somehow the above note did not say just about enough.So, some discussion was done as to what should be added... 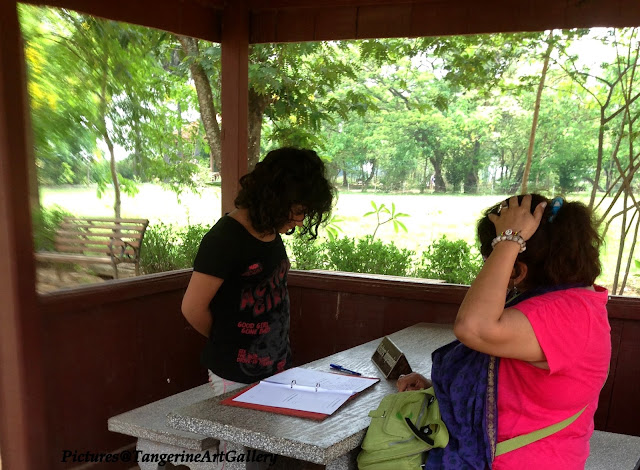 ......some more minutes of concentration and some more writing..... 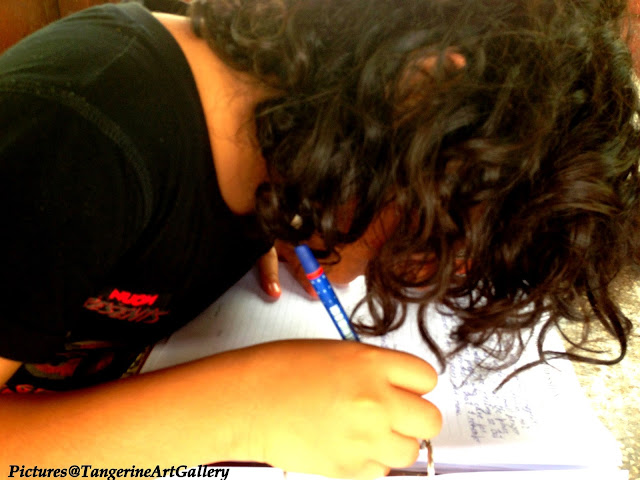 The final note below which gave some solace to the heart and troubled soul of a young sensitive mind..... 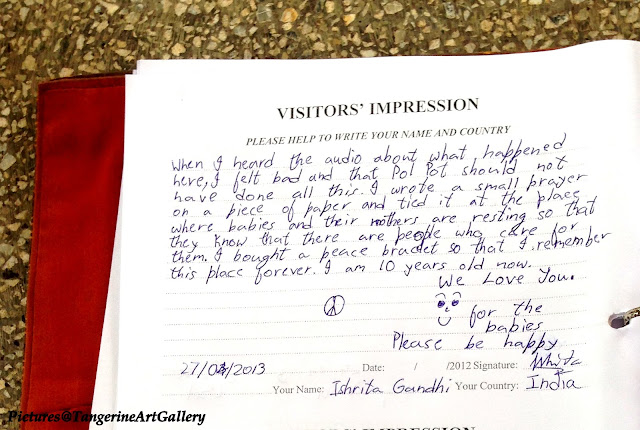 By making our own children aware and sensitive to these issues in every small way possible, we can go a long way in hoping for a peaceful future for humanity.

Just say the statement below ten times to understand the meaning of gendercide.

Millions killed, aborted or abandoned or trafficked simply because they are girls.

I am aghast at what I see and what I read around me.

Look at the picture of this girl. 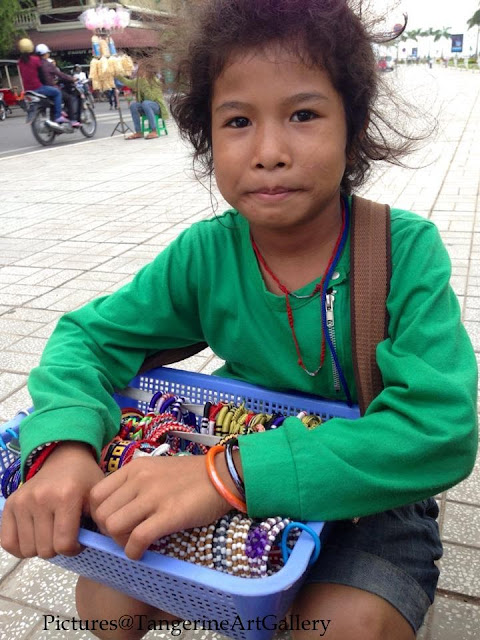 Because there is a craze in South East Asia for sleeping with a young virgin....

Here is an excerpt from an article ,I recently read, by someone who worked at the International Justice Mission here....on sex-tourism in Phnom Penh Cambodia and other South East Asian countries.

As heartbreaking as this problem here is, these Westerners only account for roughly 10% of men seeking underage girls. There is also a large demand for virgin girls from groups such as Asian businessmen travelling through Cambodia believing that sleeping with virgins will bring them luck in their business endeavours.
The greatest demand for virgins, however, comes from Cambodian nationals. Beliefs that sleeping with virgin girls will keep them looking young, make them more powerful, cure them of HIV and bring them luck produce a high demand amongst Khmer men.
One man who purchases sex with young girls claims, ‘I was told that if I had sex with a virgin girl it would enhance my powers. Enhance my beauty, that is, stay young forever’.
Another said, ‘Most people might see that I look young. Personally I believe it. I think I stay young because I have slept with young virgins.’
The demand for virgins is self-perpetuating. The value placed upon virginity means that men seek younger and younger girls in order to ensure that they are virgins. Of course, where so many of Cambodian sex workers are HIV+, the demand for a true virgin becomes even greater, as men want to protect themselves.
What does one do? How does one react to the above? It is bizzare to say the least. I agree that it might take ages for thought processes and things to change. Everything is so ingrained in the socio-cultural fabric of these societies that any change would take years and years. But, because of this, one can not give up and let such crimes continue.

As Rita Banerji of the Fifty Million Missing Campaign rightly says in the video http://www.youtube.com/watch?feature=player_embedded&v=42i1sIZ-9kQ
we need to turn the mirror around...we need to look at ourselves.

Please watch the (entire) following video by pressing the link below to understand the true impact of her statement.The climax of the video is extremely important.

We must all take some time each day to think, reflect and take action at our own level, however small, to change our perceptions towards the girl child....and according to me any change in society starts within my own family. 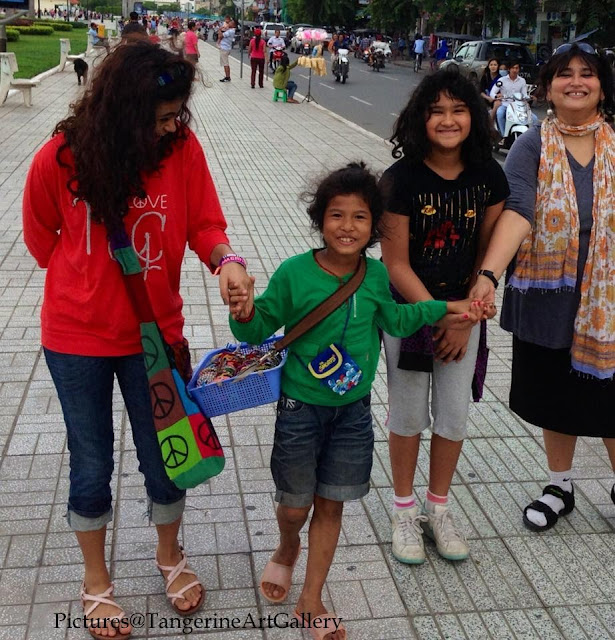 This beautiful kid has an equal right to live a decent happy carefree life as do my own children. In our own small way we try to exchange some moments of happiness with these young perturbed girls...

There comes a time when we heed a certain call
When the world must come together as oneThere are people dyingAnd it's time to lend a hand to lifeThe greatest gift of allWe can't go on pretending day by dayThat someone, somewhere will soon make a changeWe all are a part of God's great big familyAnd the truth, you know,Love is all we need......(We are the world)

Posted by Art and Ginger Chai Conversations at 3:32 PM

....love you woman.....you with the enormous heart...you will an open mind.....thank you for being a part of the healing of the killing fields ......its awful to see images of these tortured souls...but also therapeutic cos they remain to remind us of the innate cruelness in the human race and how we can make sure it never happens again.....

and I liked the blog.....loads of love Rini

Dear Rini,it hurts so much, many evenings I find myself crying sitting at the riverside,not really knowing what it is I cry about.And after I wrote this post I find everything else to be so mundane to want to write about anymore.Only today I find myself in an objective place to be able to respond to your comment.

Love you lots and lots,Praachi.

My name is Priyanka and I am part of the Digital team at Perfect Relations. We have been working with the online community for various events and product/service reviews for our clients in the past. Our clientele ranges from popular Hotels, Hospitality brands, Lifestyle , FMCG, Corporate brands etc.

I would like to know if we can share an event invite with you for an International Theater festival for children.

Please let me know how we can connect.

My details are as below: